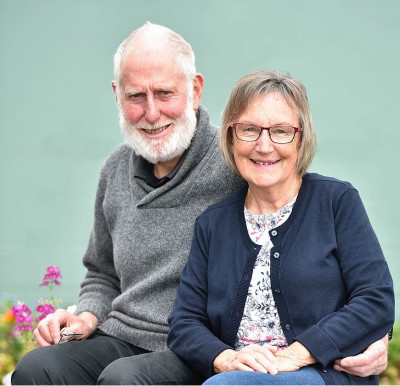 “If every person just did one voluntary thing a week wouldn’t New Zealand be an amazing place?” This is the philosophy of Heather Cochrane, a long time volunteer in our community. In addition to their long time involvement with the Gisborne Volunteer Centre,

Heather alongside husband Brian has contributed volunteer time to more than 20 organisations over the years. Their roles have been varied and diverse from committee roles to Land Search and Rescue, Community Patrols, Eat Smart Tairawhiti, Age Concern, Victim Support, and just too many to name them all here.

Brian has also been involved in volunteering internationally, a true highlight for him was volunteering in the Amazon jungle of Brazil in a ‘Jungle Marathon’ as the chief timekeeper then went on to volunteering also in Tasmania, Portugal, Cairns alongside his yearly presence at the Weetbix Tryathlon here in Gisborne.

When speaking of their volunteering they are humble and modest regarding their contribution saying “ we haven’t really done that much” however as the conversation went on they continued to recall all the work they had done, even appearing a little surprised at what they have contributed over the years.

Forty years ago farming about an hour inland from Tolaga Bay life was fairly isolated but already their volunteering journey had begun with both involved in their children’s school - both were very busy on the farm but Heather says “it’s just what you do when you have the time”…” or not” says Brian with a chuckle.

After leaving the land which had a huge impact on them both, they were feeling no sense of belonging in the community, volunteering was an ideal way to connect and gain a sense of being a part of their new community. “It just seems silly not to contribute,” says Heather. When asked exactly what their motivation has been they talked of how they have never really over analysed their intentions, they just do it. If they see a need then why not?

Brian also spoke of how good the community has been to them. They are not seeking recognition, it’s not about accolades they say but feeling good, they also say they get more pleasure from giving than receiving. They both spoke of being genuinely grateful for their experiences with many unexpected benefits to themselves and feeling a part of the good work done by so many, not for profit organisations in this city.

Both Brian and Heather talked about how they support each other and do acknowledge one another’s work (albeit in a very low key way). Throughout the conversation, they both needed prompting to acknowledge just how much they have given with Brian in his very understated way saying “I’d just hate to have nothing to do”.

Volunteering will be something they will continue to do for as long as they can, “giving back” is important to them.

We as a community are lucky to have people like Heather and Brian giving as they do.